Painting for the Drunk.

A while back, I was suffering from a case of painter's block. I just couldn't come up with any new ideas and it was getting me down. I think the problem was that I couldn't stop thinking. I was too busy,  distracted, and stressed out. I found myself obsessing over technicalities and was unable to finish anything.

I was looking through some art books that turned up when I was rooting through the studio and found an article about Francis Bacon. That explorer of the dark heart of artistic expression (or something). My eye fell upon the creepy yet fascinatingly phallic representation of ''Three Studies for Figures at the Base of a Crucifixion."


Here, dear readers, is a quote from Bacon re. the triptich:

"I was so drunk I didn't know what I was doing."

My brain mulled the words as I looked from the page to my canvass and messy palette....
What darkness lives in my heart? I wondered. What bizarre creatures might be unleashed onto the canvass if only I were slightly less uptight?

STEP ONE. Find the right booze.

Not being able to afford my own alcohol just at the moment I found alternative means...


No. Not drinking the solvent I use to clean my brushes, but you're in the right ballpark.


You see...A few summers ago my younger cousin Andy had a party.

A garden party to be exact. I can still recall the melodious heavy guitar riffs and sounds of vomiting outside my window at 5am after I'd barricaded myself inside.

The front lawn looked like downtown Baghdad after the arrival of democracy. Bodies lying on every available surface and a wild mountain goat eating Pringles off someone's chest...

Anyway among the wreckage were bottles, many of them empty and most of the contents unidentifiable. But in one, with a, Eastern European looking label , remained a green liquid. It was untouched....For a reason as it turns out...but more on that later. 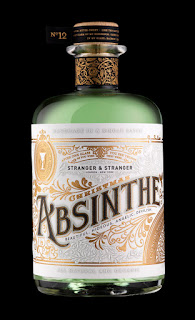 It was perfect! What more Arty drink than absinthe? The very devil that drove so many Victorian Frenchmen into creative insanity. How could I NOT try it?

I poured a large glass and got to work...


So here's what I didn't know about absinthe

A. The supposed hallucinogenic properties of wormwood are greatly exaggerated and in fact... Non existent. The brain addling properties the drink used to posses were from the green colorants they used to put in it. Good old green!

Either way I wasn't drinking that shit.

First... wear a smock (or something) and make sure you have:

Solvent ( do not drink).

Music is needed for painting So after a while ( two hours) of dancing around to Sigur Rós instead of painting, I actually stepped up to the canvass and gave it a shot...

"Come on subconscious!" I cried. "Do our worst! Open the floodgates bitch!"

I have double vision at the best of times so I was slightly physically hampered by this but once I got started I didn't seem to matter any more.

The next thing I knew I was transported... To the couch where I was watching TV. I don’t know what happened. 'Two and a Half Men' was on.


Anyway After going back to the studio and drinking more Raspberry hooch I looked at my creation.

The darkest recesses of my subconscious ladies and gentlemen. 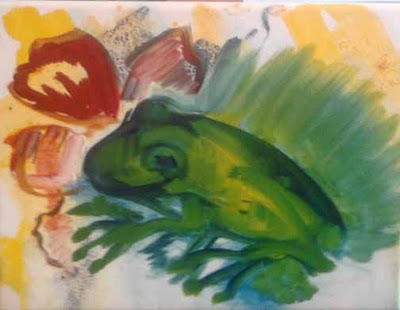 Having analysed it and delved deep, I have identified it as a happy tree frog smelling a big pink flower...


Francis Bacon eat your heart out.
Posted by Di at 1:33 PM 4 comments: Links to this post