So After two days in Kentucky I think I'm finally beginning to recover from the 18 hour train ride from New York. After ten days in the city my first impressions are still forming. I suppose that's normal since it was such a huge culture shock.

John and I officially have museum fatigue after seeing the Guggenheim, Natural History and MOMA in one day , The Met having been scoured for two days previously.

So much beautiful stuff, The Impressionists are my favourites to see in real life because they really do look different in the flesh. I have to say I never really appreciated Renoir in books but in real life...Wow.

I saw a documentary on Sky Arts a while ago analysing why he didn't show the seamy underbelly of Paris and chose to show the lighter side of life instead. The doc suggested that he was trying to be ironic and that he was making a political statement by showing the middle class being shallow and decadent.

I think a more likely explanation might be that he , not being a wealthy man, actually lived in the underbelly and might not have wanted to dwell on it. Maybe he liked to see people enjoying themselves? Maybe he wasn't a total misanthropist? Just a thought.

We were also lucky enough to see some Picasso,Dali, Miro and Kandinsky Etc. Damian Hurst's Shark is on Display in the Met. I wonder how he managed to get one? Did he catch it himself or Hang around the aquarium a lot until one floated belly up?Personally I would have used a dolphin. That would have caused more fuss. Dolphins were voted the worlds favourite animals behind Tigers and Pandas (The very ones people are killing of the fastest...Irony?)

The public's reaction to a dead Dolphin

Anyway it started to get a Little less fun for me with Beyus, Bacon,Pollack etc.Is it just me or did art kind of go to shite after World war two? It seemed to get very clever any cynical and really, really ugly. It doesn't do much for me anyway. I wonder what happened?

Yeah, I don't get it either

My personal favourite was the Henry Darger exhibit at The Folk Art Museum. He certainly lived in his own world. Not in a good way either. He makes me think of a psychotic Lewis Caroll. 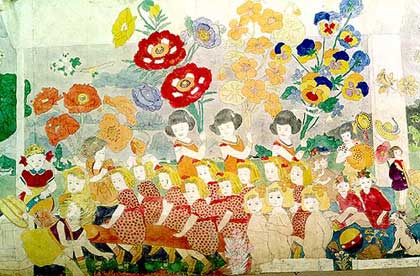 
We spent an afternoon in the West Village and I put on my best ' I could be someone' face and told a couple of gallery proprietors I was 'doing research on NY galleries' and discovered that... Surprise...They charge quite a lot. 1600 to 2400 for a small oil (about 16 by 20) and anything up to 20 or 30 grand for a large one. Expensive but so is rent in the West Village (7000 a month or thereabouts)