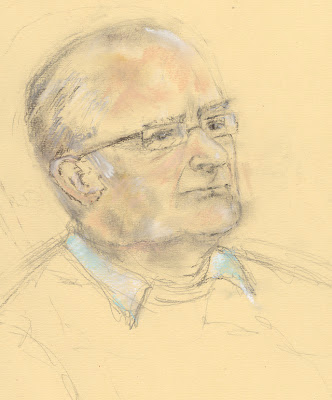 Above is a sketch I drew in November of Zoltan Zinn Collis at his home in Athy. It's one of the preliminary sketches for a series of oil paintings I'm working on for the Sentinel 70 Project, for exhibition in 2015.

It was Lee Tiller who introduced me to his brainchild, the idea of the Sentinel 70  project: An art exhibition commemorating those lost in the Holocaust on the 70th anniversary of the end of the war. Although the planned exhibition isn't for another 2 years, I felt I should not waste time.

The idea was daunting. It is a subject that is often exploited in art for horror, or sentimentalised for entertainment (I don't know which is worse). The choices, it seemed, were to either work with symbolism or realism.

Either option would pose problems. In my own life I have been so protected, and lucky to have lived in peace. I felt it would be disingenuous to imagine I had a grasp on the psychology of genocide and war. I am not brave enough to make art about atrocities while survivors still live and deal with the memories every day. I asked myself how a survivor might feel viewing such an exhibition.

So, after much deliberation, I contacted the HETI and asked them how many survivors live in Ireland, and if the idea of a series of portraits would be an acceptable tribute to them. (Thank you Lynn Jackson for all your help).

A while later I got a call from Zoltan. I knew his name. I had read his autobiography few months before.

It turned out he had worked at Parknasilla Hotel in the 60's and had plenty of, very entertaining, stories for me about Sneem, which I won't transcribe here, to protect the reputation of the general population of the village.

Immediately understanding the need to properly meet someone before embarking on a portrait, he invited me to his house in Kildare. When I assured him that there was no need to talk about the past or anything that made him uncomfortable, he laughed.

Indeed he didn't take himself too seriously. He insisted on meeting me at the train station.

His rounded posture stemmed from spinal TB contracted as a child. He had trouble breathing too.

"The one lung I have left has emphysema," he explained, asking me as he drove across town to his house who else I was going to be visiting.

At the mention of Suzie Diamond, he smiled.

"Ah, my friend Suzie! She used to mind me when we were in Belsen."

Suzie had been only four years old. Zoltan's mother and her own mother were both Hungarian, they met on the transport. Both women would be lost just after liberation but their children formed a close bond during their long convalescence in the Belsen hospital.

Suzie would later tell me that when she thinks of Zoltan as a child she doesn't see a face as much as a huge smile and shining eyes.

Dr Collis said of his first meeting with Zoltan:

"On my way around the children’s hospital one morning I came into a small ward. Here I found Han with the most entrancing scrap of humanity in her arms. He appeared one great smile. There was very little else of him. The fever (typhus) had just left him, his body was wasted.”

By all accounts he was a charming child who one couldn't help but love. Dr Collis certainly loved him at first sight, that much is clear in his writing. He was charming as an adult too. He went out of his way to make me feel comfortable in his home.

We sat in the kitchen and had a cup of tea. He let me use his Winnie the Pooh cup (he was a big fan, he said). He showed me pictures from one of his father's books of himself and his sister, Edit, as beautiful children, sitting on the grass outside the hospital at Belsen, their heads still shorn.

Zoltan was one of the last living links to the charismatic and accomplished Dr Collis, who was a "Big personality" to say the least.

"He used to walk into (a notable Dublin Hotel)..." Zoltan recalled mirthfully "...Wearing muddy wellies and a hat with a bit of bog cotton in it. He'd stride in there like he owned the place and the staff would be so polite," 'Oh Dr Collis!' "Of course I would be trailing behind hiding my face in embarrassment and he wouldn't know why."

It was Robert Collis's confidence, and his great compassion, that bought Zoltan, his sister Edit (both of whom Collis adopted) Suzie, her brother Tibor and two other surviving children to Ireland, at a time when the country wouldn't take Jewish refugees.

"He walked in without any official papers and said, basically, 'What are you going to do about it?' "

Zoltan credited his sense of humour, in part, for his survival, but there was, of course, great sadness there too, and a certain level of resentment, which he said, "comes and goes."

One thing he did was to help others. He worked for the Samaritans for 10 years. He got rather upset talking about the "awful things" that happened to some people in industrial schools in the 70s and 80s.

Suffering, it seems, does not necessarily desensitise one to the suffering of others. That is good to know.

In more recent years he traveled to schools and educated teenagers about the Holocaust.

After teasing me: ("I promised my wife I wouldn't give you hell about your German name.") He told me the story of one school lecture, when a young girl ran over and hugged him, then burst into tears.

For all his talk of resentment he didn't seem to hold a grudge.

"We wonder: Why Germany? Why anywhere? Why Rwanda or the Balkans? This... impulse..., this tendency we have, it manifested in the way of the country, in bureaucracy and education and 'civilisation', But look at us!" (He indicated the world in general) "Look at a new born baby, we're all born with closed fists."

He clearly loved children and his family was very precious to him. Showing me pictures of his great grandchildren on his phone and the artwork on his fridge. He was a lover of art in general and had what might have been an original Augustus John sketch in his living room. He told me he had a lot of sympathy for "starving artists."

His first family: the one that he lost? He didn't mourn for them properly until revisiting Belsen in the 1990s with Suzie for an RTE documentary. He had tears in his eyes describing his visit to the mass grave that may have housed the remains of  his mother, baby sister and his brother, who died next to him in the Red Cross tent after liberation.

"He wasn't as sick as me, apparently, but he decided he'd seen enough."

His physical health was a lifelong reminder of his history. He showed me his vast collection of medicine, (the pink painkillers being his favorite.)

"I always say: I've been to every '-ologist' at Tallaght Hospital except the gynecologist," he joked.

On the way back to the station he told me more about the Collis family and Robert's brothers, John Collis and Maurice, who were also both writers. He hoped that one day someone would make a film about them. His own remarkable life, I thought, would make an epic in itself.

Before I boarded the train I thanked him for welcoming me into his house, and said that if the portrait reflected any of his personality it would be great.

"Yeah, well, I warned you, I like to talk." He shrugged off the compliment.

Humble and brave and, I hope, in the end quite free.

In November, after the death of my grandfather, whilst looking through his bedside table, I found a copy of Robert Collis's autobiography, To be a Pilgrim, in which he, so evocatively, describes Zoltan as a child. I hadn't told Max the names of any of the people I was working with (or much about the project really, for fear of upsetting him while he was sick), So he must have picked up the book by chance.

Not long afterwards I got a call from Zoltan's daughter Caroline to say that he had passed away.

It was only 17 days later that his beloved sister Edit followed him. The close bond with her brother was not severed for long. Edit lived in Bray, she didn't talk about her wartime experiences. Her father's book The Ultimate Value. (Published 1951)  Is a harrowing tribute to her bravery as a child.

My heart goes out to Zoltan's wife Joan, and his daughters and grandchildren. You had a wonderful man in your life and I'm so glad I met him, if only briefly.

A generation is slowly leaving us. Their memories are so important. The lives they lived more important still. They lived, they had families, they had careers, they had the years that were so brutally taken from millions of others.

Every day of their lives is a slap in the face to the genocide that tried to take them (that human tendency to grasp and take from our brothers), a reminder that, in the end, people are stronger than that.

Let's make them immortal in our own memories.